This article was originally published on OfferZen.

Anne Gonschorek was a huge help in making this article come together. She’s looking for more contributers to the OfferZen blog. Take a look at Source for more info.

We live in a digital world where service downtime is not tolerated by customers, but at the same time, not everyone has the luxury of cold standby environments or Kubernetes clusters to enable this. I recently had the task of finding a way to make zero downtime deployments work using good old Microsoft IIS, as well as automating the deployments behind a single click. I’m sure there are others out there with similar constraints. If you’re one of them, then this is for you. 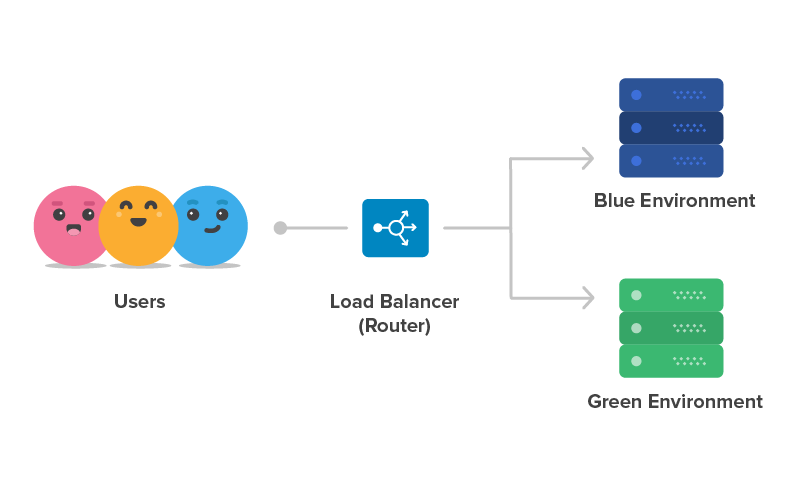 Until recently, our team has been doing deployments out of the regular business hours (i.e just before 9am or after 5pm). This has worked really well for us, but the honeymoon is coming to an end. We’re now building systems that need to be up all the time as we never know when a customer may need to access them. The traditional deployment time in other parts of the company is Sunday morning at 5am, but ain't nobody got time for that.

Now, I know what you’re thinking: just use Docker with Kubernetes and set up a cluster in “The Cloud” so you can do rolling hot deployments! Easy. I really wish that was an option for us, but unfortunately, it just isn’t. Here’s why:

My research led me to a concept called Blue/Green deployments as well as an article on how to implement them with IIS on a single server.

The general concept of a blue/green deployment is the following:

Here’s how you do this for yourself:

Blue/green deployment with IIS on a single server

First of all, we will need to install 2 modules into IIS:

ARR enables IIS to work as a reverse proxy in front of a farm of IIS instances. In normal cases the other instances would be on other servers like a true server farm. This is a valid option for blue/green deployments but in our case, we wanted to keep it in our existing infrastructure, so the instances will all be on the same machine.

The server farm is not exposed on a port to the outside world by IIS. We need to use the Url Rewrite module to route traffic to the Server Farm instead of directly to the regular web applications. This is what gives us the power to take an instance offline without affecting users.

Once both modules are installed, we restart the IIS management console.

Before we get started with the new IIS configuration, we need to decide a few things:

Now let’s set our blue and green instance up. ARR requires that the different instances each have their own host names but we want to run these on the same machine. That’s why we trick the machine by editing the hosts file:

Open “C:\Windows\System32\drivers\etc\hosts” in a text editor and add the following:

Now, back to IIS. You’ll see a new entry on the left titled “Server Farms”. Right-clicking allows you to add a new farm: 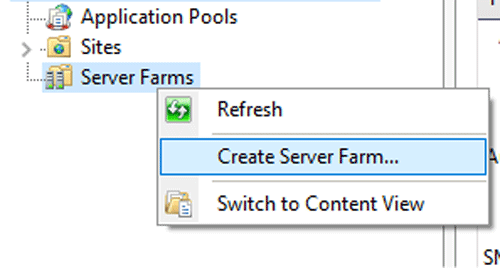 Give the new farm a name as decided earlier. Then we need to define the servers in the farm. These names must match the hostnames added to the hosts file earlier: 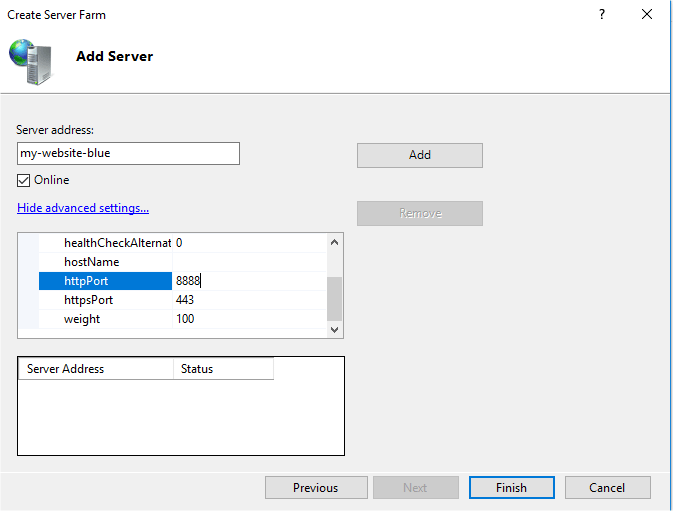 Click the “Add” button, and then capture similar details for the green instance (with the green hostname and port). Then click “Finish”. Once done, expand the server farm name and click on “Servers”. You should see something like this:

Next, we have to configure two websites, each pointing to their own file systems and listening on their own ports. In our case, we configured as follows (using the locations and ports decided on earlier):

You should now be able to open a browser on the server and navigate to:

You’ll notice that the ARR module is not yet routing to these servers if you hit IIS on port 80. To enable this, we’ll need to add a URL Rewrite Rule.

Click on the root node in IIS, locate the icon named “URL Rewrite” and open it. Click “Add Rule” in the top right and configure your rule as follows:

Any traffic directed at http://my-website on port 80 will now be routed to the server farm called “my-website”. ARR will then take over and route to our instances. If you now navigate to http://my-website you should see your site.

If you were to differentiate the two deployments, you’d notice that ARR round-robins between the two sites. This behaviour is nice for load balancing, but not for our use case, because we want to have one instance offline so we can deploy to it without affecting users.

Right click on an instance (doesn’t really matter which one) and select “Take Server Offline.

Now we're all set. If you happen to read the article I mentioned, you’ll see they suggest taking the staging server out of the farm using the health monitoring. I found this didn’t work for us because:

To get around these issues, I made the following changes:

Automating all the things - Level up on Powershell

We’ve been on a drive to make sure all of our deployments are automated and triggered with a single click. This ensures deployments are reproducible, predictable and can be performed by someone without a detailed knowledge of the system. We’ve achieved that using our on-premise instance of Microsoft’s Team Foundation Server (also known as Visual Studio Team Services). TFS basically runs on PowerShell scripts, so I’ll focus on the scripts I wrote instead of getting too much into TFS. Hopefully, you will be able to use the scripts on other build servers as well. I’ve picked out parts of the script to highlight how they work.

There are a few functions that I ended up using all over the place. These have been pulled out into their own modules. There are also a couple of functions used to assist in running the scripts remotely on the target machine. I won’t cover those here but they are in the repo.

We need to make use of the PowerShell cmdlets that allow us to query and control IIS.

For this, we first need to load the assembly into our context:

We can then get an instance of the ServerManager:

Using this, we can get a handle on a specific server farm using its name:

Once we’ve found the farm, we need to locate the individual servers within the farm:

Using the above two functions, we can then query and control IIS to coordinate the deployment.

Have a look at the full module for the rest of the code.

Before we deploy anything, we still need to determine which instance is which. For this, we use a preparation script that queries IIS and returns the current state:

If blue is not online, it means that green must be the live instance, so we have a similar block getting the state of the green instance.

The preparation script helped us discover where we need to deploy our new code. We do this using the normal deployment steps of our deployment tool into $result.StagingDeployPath.

Now that staging contains the latest version, we can do the actual work of the zero-downtime deployment.

Deploying in this way does mean that we needed to make some slight changes to the way that we build our applications. There may be cases where an older frontend tries to access a newer API. Or a newer API accessing a newer version of the database.

For this reason, we will need to ensure that the public API service of each component is always backwards compatible:

We have this automated process running for a few of our deployments and are slowly rolling it out to the rest. I’ve also had some time to think about some enhancements I’d like to explore:

My Powershell skills were pretty basic when starting this project. It took a lot of Googling and experimenting to get things working how I needed. These resources were particularly helpful:

When running Powershell scripts on TFS/VSTS, specifically formatted log output can be used to communicate with the build agent.