This is part 2 of my series on Home Automation

In my last post I mentioned that after buying a Google Home, I wanted to try to automate some aspects of my house. After disappearing down many rabbit holes, a colleague suggested that I look at a device called a Sonoff from a company called ITEAD. Most of the Sonoff devices are based off the ESP8266 chip, which is a simple micro-controller with built in WiFi. 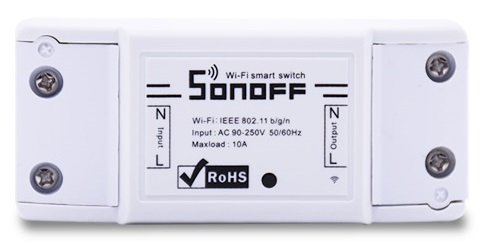 I started off with a Sonoff Basic, which is a WiFi enabled smart switch that enables you to control devices using the ITEAD app (or the Google Home/Amazon Echo). They're relatively cheap (+/- R125 or about $8) so I thought they would be a good way to get my toes wet in home automation.

The simplest usage of the Sonoff Basic would be as follows:

I however decided to complicate matters slightly. I noticed that the company I was buying it from offered to flash a custom firmware onto the device. Being the curious developer that I am, I went for that option. The custom firmware is called TASMOTA.

Flashing TASMOTA opens up a lot of possibilities and extra functionality not available on the standard Sonoff device. Features such as:

As mentioned, my Sonoff came pre-flashed with TASMOTA. I have since bought the required equipment to flash them myself, perhaps that will be another post, but there is already plenty of content online about how to do that.

How I used it

I ended up using the Access Point method and configuring my WiFi details. There after I was able to switch the lamp using the button or the web interface of the Sonoff. This was all well and good, but not super useful. I needed some way to control the device remotely without having to log into it all the time. But that's the topic of my next post, coming soon.